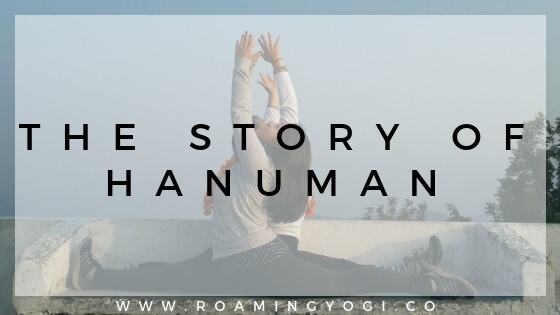 Today we’re talking about how to do the splits – also known as Hanumanasana. But first, the story of Hanuman!

Hanuman is the monkey god, but he wasn’t always. He was actually born Anjaneya; as in Anjaneyasana – low lunge! When we get into the physical practice, you’ll see this come into play, as Anjaneyasana is a preparatory pose for Hanumanasana.

Anjaneya is said to have been the son of the wind god, Vayu, and a woman named Anjana. So he was half mortal and half divine.

As teenager, Anjaneya was extremely precocious, and he loooved magnos. One day, he looked up into the sky and mistook the sun for a big, juicy mango. Naturally, he leapt up to grab it (and being half divine, he could).

This angered Surya the sun god so much that he struck Anjaneya down, killing him. Vayu, Anjaneya’s father (lord of the wind), was so furious that he took a big breath in and depleted humanity of air.

With humanity’s existence in the balance, the gods compromised and returned Anjaneya to Earth, but he was reborn as Hanuman. And in order to avoid future mishaps, he would never be able to fully remember his own divinity.

Hanuman was put into the care of Sugriva, the monkey king, and he took the shape of a monkey to better fit in. One day he met King Ram and the two became fast friends.

Shortly thereafter, the evil demon king Ravana kidnapped Ram’s wife, Sita, as part of his plot to take over Ram’s kingdom. Ram could not go rescue Sita because he had to defend his kingdom, so he sent his dear friend Hanuman to find her.

So Hanuman took a great leap, from India to Sri Lanka, using the power of his back leg to propel him skyward, as his front leg reached to touch Sri Lanka’s shore (splits pose!).

Hanuman did not know how he would make this journey (he couldn’t recall his own divinity, remember?). He had no idea what he was truly capable of, but he took that leap of faith anyway.

In her book, Myths of the Asanas, Alanna Kaivalya says “many of us shrink before impossible tasks, or even tasks that are just a bit hard, because we are just like Hanuman. We easily forget that there is a part of us that is also divine and can accomplish the impossible.”

Hanumanasana is a challenging pose. One that takes much time and care to come into. So now let’s talk about just that…how to do the splits!

HOW TO DO THE SPLITS [HANUMANASANA]

The splits require a loooot of opening and flexibility in both the front and back of the legs. The front leg requires hamstring openness, while the back leg requires openness in the hip flexors.

Finding that balanced stretch between the front and back legs will bring you balance in Hanumanasana.

Don’t worry about your pelvis touching the ground. Instead, try to find a sense of lift, and a level pelvis, so that you are neither rounding nor arching your lower back.

Please use props to support you! You can place a block or two (or three!), or a bolster, underneath the front thigh. A couple of blocks underneath your hands will help you to stay lifted through the spine.

And use the muscles of your legs to support you as well. Hug the inner thighs towards each other – towards the midline – and press your legs into the earth to help you find lift. Engaging your muscles will help you come into a safer stretch.

Most importantly, remember that you, too, have a spark of divinity within you, and that you are capable of more than you might think.

Ready to channel your inner Hanuman? I’ll meet you on the mat!