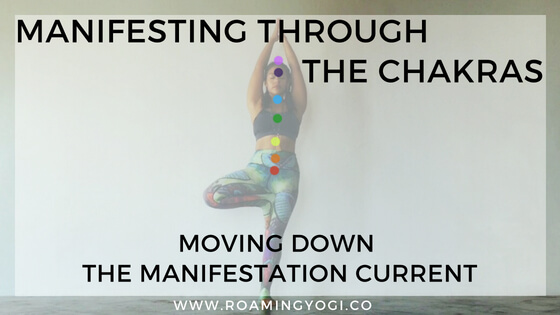 You might be a little chakra-ed out, but I’ve got one more chakra practice for you! This post is all about manifestation. Specifically, manifesting through the chakras – how we can utilize the chakras to manifest our dreams and desires into reality.

If you’ve missed the individual chakra posts, be sure to check those out!

If you’ve been following our chakra journey, then you know that the chakras are energy centers in the body.

In the 7 chakras post, I talked about prana, which is the vital life force energy that’s responsible for all life experiences. I also talked about the nadis, which are the pathways that transport prana throughout the body – like prana subway lines.

The chakras are centralized locations where the nadis converge – like prana subway stations, where different lines meet and cross.

Well, in addition to the thousands of nadis that run through the body, there are also four major channels of energy – like highways – that also converge at the chakras. These run upwards, downwards, and horizontally.

The main currents of energy within the body flow upward and downward. This is because we are vertical beings, who move through life with our feet on the ground and our head in the air. These are the currents of liberation, manifestation.

As we come into contact with the world outside of the body, we participate exchanges of energy, which engages the horizontal currents. These are the currents of expression and reception, which move outside of the body. We express what’s inside of us, like our thoughts, creativity, or feelings; and we receive energy from those around us in the form of information, emotions, or touch.

If either of the the horizontal currents are blocked we may experience difficulty in our social interactions, as we’ll have a hard time receiving or expressing one or more of the chakra-related aspects.

In last week’s post, we focused on the liberation current. Today, we’re going to dive into the manifestation current.

The downward current is called the manifestation current, and we put it into action to manifest ideas or goals into reality.

The manifestation current begins at the crown of the head and travels down through the chakras to the base of the spine (as we’ll do in the class below). This current represents the process of consciousness manifesting into physical reality.

This current of energy is our roadmap to make our ideas into intentions, our intentions into specific goals, our goals into action, and our actions into realized, manifest ideas. Hence, the manifestation current.

If this downward current is blocked, you may have lots of ideas, and you might even talk about them with your friends, but you haven’t been able to see them through to completion.

This work will help to change that.

THE UPPER CHAKRAS VS. LOWER CHAKRAS

MANIFESTING THROUGH THE CHAKRAS

Let’s begin by taking hold of an idea or goal that you’d like to see to fruition. I’ll use myself as an example – four years ago, while I was in my first yoga teacher training, I had this errant thought: I should see more of the world…I should go traveling.

I began to do some research on backpacking the world. As I did, I started see myself with a big backpack, getting on and off planes, trains, and buses. Seeing new places, eating new foods, walking new streets. This is the work of the third eye chakra – visualization. Seeing within the third eye what the two physical eyes cannot see because it is not manifest yet.

As this vision became clearer, I started to talk about it. I talked about it with my partner, who as it turns out, had also been thinking about going traveling. I shared with my friends and family. My vision was being put into words and I shared those words, bringing this idea down into the throat chakra, where it truly began to take shape.

This is where many of us repeatedly get stuck. It’s fairly easy to dream and visualize. It’s much harder to express those visions out loud. We fear what other people will think and it feels much safer to keep our dreams and visions to ourselves.

With the power of my words, my vision for traveling the world started to become more real, and my relationships and connections started to reflect this. My idea was traveling down into the heart chakra, where it would need the power of connection and love to continue to manifest.

My partner and I grew much closer as we shared this vision of travel. I sought out facebook groups and other travel communities, seeking out connections that aligned with my vision. I practiced (or tried to practice) compassion for myself when I felt that it was all too much and I was incapable of making it happen.

Remember to show yourself love throughout the manifestation process, particularly as we move down into the third chakra space. Shit will happen and the going will get tough, but if you can stay kind to yourself you can make it through.

My vision for traveling the world started to make it’s way down into the manipura chakra space. This is the chakra of doing; of taking action. My partner and I decided on how much money we would need to save to travel for the length of time we wanted. We decided on a time frame to save that much money, and we created a budget to help us get there.

We took this big, bold, audacious idea and broke it down into the manageable, actionable steps we would need to take to make it a reality. Then we practiced will power and took each of those steps.

Along the way we encountered obstacles and frustrations (obviously, right?). This is where the power of the sacral chakra comes into play. The svadhisthana chakra is our seat of creativity and fluidity. We had to think creatively to move around those obstacles. We had to flow with the frustrations in order to come out on the other side.

And then finally, after working the hours, saving the money, and selling most of our belongings, our departure date arrived and we boarded that first flight. This thought that I’d had over a year earlier, that had descended into a goal, had become manifest here on the earth plane, the space of the root chakra.

Related: What is a Chakra? A Guide to the 7 Chakras

Ok, that was a lot of talking, are you ready to do some moving and manifesting? In this practice, we’re moving from crown to root, taking a goal or idea with us, from abstract thought to manifest reality.

When you’re done, go write that shit down. Don’t leave it on the mat. Take it into the world and manifest something epic.