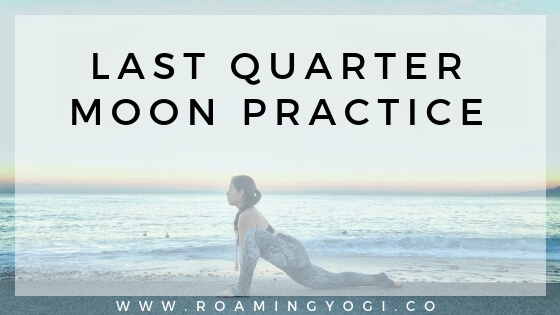 This week, we’re closing out our month of lunar yoga practices with a last quarter moon practice! The third quarter moon occurs one week after the full moon, and one week before the next new moon.

What does the last quarter moon mean for your new moon intentions?

Well, we are nearing the end of this lunar cycle, which means that you might start seeing your intentions manifest. However, do not despair if you don’t. Some intentions require that recommit to them time and time again before manifestation happens. Be patient with this process, my friend.

Some themes around the third quarter moon are release, letting go, and forgiveness. We are moving into a phase of surrender.

During the coming week, we surrender our work over the Universe, knowing that we’ve done the best we could with what we had, and allowing the Universe to continue to guide our path.

The moon is gradually appearing to decrease in size as it makes its way back to the new moon phase. This is the time to let go of anything that we don’t want to bring with us into the next lunar cycle.

We must release and surrender in order to be ready to set new intentions, or recommit to intentions, during the next new moon.

To help us align with the energy of this third quarter moon, we have gentle yoga practice that’s focused on hip opening.

The hips are where we tend to carry a lot of emotion…a lot of baggage. By opening into the hips, we invite some of that to come up so we can release it.

Allow yourself this time to surrender to your practice, and by extension, surrender to the Universe, knowing that it always has your back.

Join me on the mat to align with the energy of this last quarter moon.