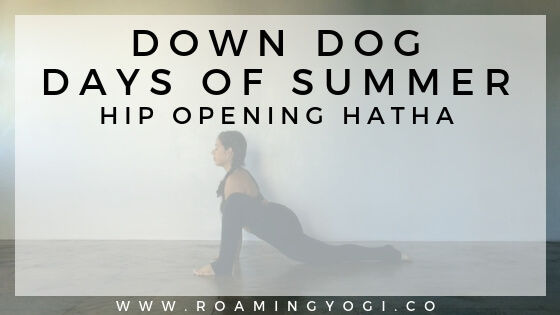 If you’ve been practicing yoga for a little while, or if you’ve spent any time practicing with me, I’m sure you’ve heard the term “hip openers” or “hip opening” before. They’re terms that we throw around a lot in the yoga world, but what, exactly, are hip openers? The hips are joints, so what does it mean to “open” them?

The hip joint is one of the largest joints in the body. Not only do the hips bear quite a bit of weight, but they also allow us to perform a wide range of motions. These include:

Only the shoulders have such a wide range of motion, and they are much smaller and bear far less weight.

So let’s take a moment to appreciate all that the hips do for us in our lives. Thank you, hips!

Now, what allows for such a wide range of motion is the fact that the hip joint is a ball and socket type joint. The head of the femur or thigh bone (the ball) fits into the socket of the pelvis (also known as the acetabulum).

The large round head of the femur rotates and glides within the acetabulum, allowing for movement in many directions.

A number of ligaments hold the femur and pelvis together, which is what creates the hip joint. And then the muscles of the thighs, lower back, and glutes work together to keep the hip stable, aligned and moving.

So what does it mean when we say “hip openers”?

HIP OPENING IN A NUTSHELL

Hip openers could affect any of the muscles surrounding the hip, depending on the position of the joint at the time of the pose.

Because there are so many muscles surrounding the hip, and because the hip joint can perform so many different movements, one could argue that nearly all yoga poses are hip opening postures!

Your warrior poses, your lunges, your forward folds…all hip openers!

So why the obsession with hip openers in yoga anyway? Well, because most of us have tight hips!

Muscles can become tight due to overuse and repeated contraction (like runners’ quadriceps), but they can also become tight from being under-utilized and weak (like sitting at a desk all day).

What we generally know as “tight hips” is the feeling of tightness or tension across the hips that comes from tension around the hip flexors. The hip flexors are the group of muscles around the top of the thighs that connect the upper leg to the hip.

On an emotional level, it is said that we carry a lot of emotion or baggage in our hips. Whether that’s scientifically true or not, I can tell you from experience, that I’ve definitely felt a sense of release in hip opening postures before.

This makes hip opening a good time to reflect on what we might be ready to let go of. As we release tension in the hips, what else can we release?

This is my invitation to you in this week’s Down Dog Days of Summer Hip Opening Hatha practice.

Use your exhales to melt into the hip opening poses, and at the same time, allow something to melt away.

I’ll meet you on the mat!